Summary of an E-Book Promotion

I changed the e-book price on Warren Lane from $4.99 to $0.99 on all platforms, from Saturday, Sept. 19 through Sunday, Sept. 27. I posted a link to the book on my Facebook page, and friends shared it. That resulted in 2 sales before the promotional sites started pushing the book on Monday. (Most people in my FB network who wanted the book already had a copy. Hence the low sales.)

The aim of the sale was to increase readership, not to make a profit. I knew I’d be taking a loss here. I spent about $600 to promote through a number of sites, which are listed below. I was going to post the actual sales figures for the book, because I like openness and transparency (I’m an open source developer by day). But I learned that publishing sales numbers violates the terms of service for both Amazon and Kobo. So the most I can do here is talk about how the promotions affected my sales rank.

Before the promotions started, Warren Lane was ranked the number 1,273,510 seller overall in the Kindle store. The book also ranked very low in its two categories:

My sales rank improved somewhat on Saturday and Sunday, because my Facebook friends shared the announcement about my book being on sale, and I launched a Facebook ad. But I didn’t start recording the category ranking until the third day of the promotion, which was Wednesday Sept. 23. The chart below shows the promotional services I used and how sales rank changed on the days each site was promoting the book.

Note that sales rank tends to move the day after sales numbers change. So when you see a change in rank, look at where the book was advertised the day before.

Again, I’m not allowed to post numbers, but I can say that if you’re selling an ebook at $4.99 on Amazon and you sit in that #2000 spot all year, you can quit your day job. Here’s a little screenshot from Wednesday, Sept. 23.

And it was kind of cool to see my book listed up there with Sue Grafton and James Patterson. Warren Lane is down there in 14th place. 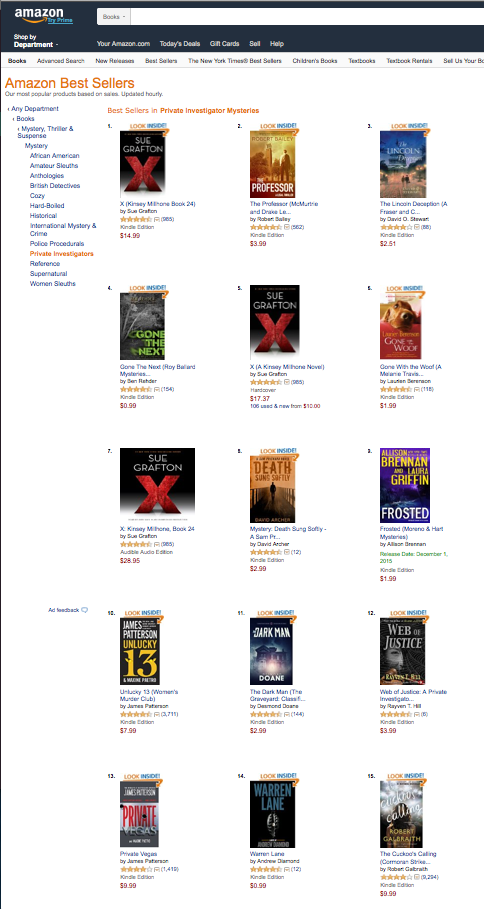 This brief entry into the top 20 of the genre made me wonder about all those writers who advertise themselves as “Best Selling Author,” even though you’ve never heard of them. I suppose one day near the top of a list in a sub-sub-genre technically qualifies you as a best-selling author. And that sounds a lot more prestigious than “slightly effective marketer,” which is what I actually was during promo week.

It’s like when I brag to my friends that my time in one of the Olympic running events is only 11 seconds off the world record. That would be the 100 meter sprint. Usain Bolt can run it in about 9 seconds, and I can do it in about 20.

Somehow, “11 seconds off the world record” sounds a lot more impressive than “not even half as fast as that Jamaican guy.”

A Note on Genre

One thing to note about Warren Lane is that it doesn’t fall squarely into any one genre, and that makes it hard to market. My friends in the book world warned me about this when I wrote the book. It’s fairly easy to market a mystery, or a thriller or a romance, because readers are looking for those specific types of books, and they go to the channels that sell or promote those genres.

Warren Lane has elements of mystery, comedy, and romance, as well as some literary leanings. I listed it under different genres on different sites: mystery, literary, romantic comedy, etc. Unfortunately, since I ran all the promos at once, I have no way of knowing which sites or which genre categories produced the best results.

A few of the promo sites I approached would not promote Warren Lane at all, even if I paid them, because despite its strong reviews, they didn’t think it was marketable to their audience. Remember, these sites are in the business of alerting readers to titles they might like. If they start pushing books that are not to their readers' taste, their readers will leave.

The upshot of all this, as my friends in publishing told me from the beginning, was that it’s much easier if your book falls into a single genre. Then people who know what they’re looking for will find it, and they’ll get what they wanted. If your book does fall into a specific genre, you may get better results on your promotion than I did on mine–particularly if you’re in a genre like romance, mystery or thriller, where the market is big.

One last problem with writing a non-genre book is that, because you have to market it through a genre channel to a genre-seeking audience, some readers get angry when they find the book is not what they expected.

I had heard that Facebook was not as effective a sales channel as the mailing lists of the e-book promo sites. While this might be true, I did manage to generate some clicks through Facebook.

I spent $20 on a Facebook ad targeting people who like Mystery Fiction, Women’s Fiction, Literature, Suspense Novels and Fiction Books. I probably could have chosen more specific targets, like people who like specific authors, but this is my first Facebook ad, so I went with those. The ad starting running on Sept. 19. I know it resulted in one sale. Possibly more.

I was going to publish a screenshot showing how many people the ad reached and how many clicks it got, but after reading through Facebook’s terms of service, I don’t think I’m allowed to do that. I will say that, based on click-through rates, Facebook was at least competitive with most of the book promotion sites. And if I targeted my audience a little more closely–for example, by choosing people who liked specific authors–click-through rates for the ad may have been as good as or better than click-through rates from the promo sites.

While the big, known sites with large subscriber lists (Free Kindle Books & Tips , Kindle Nation Daily and The Fussy Librarian led to the largest bump in sales, the site that impressed me most on a technical level was Genre Pulse.

Genre Pulse links to your book through Bitly, and they provide a page that allows you to track clicks in real time, so you can see what you’re paying for. (See the image below.) The cost per click on Genre Pulse was less than half what it was on Facebook, and as I mentioned above, the Facebook ad did pretty well. I have no idea how many of these clicks converted to sales, but Genre Pulse publishes click-through rates and buy rates on their site.

Genre Pulse is working on a number of other services, so if you’re promoting a book, check them out. 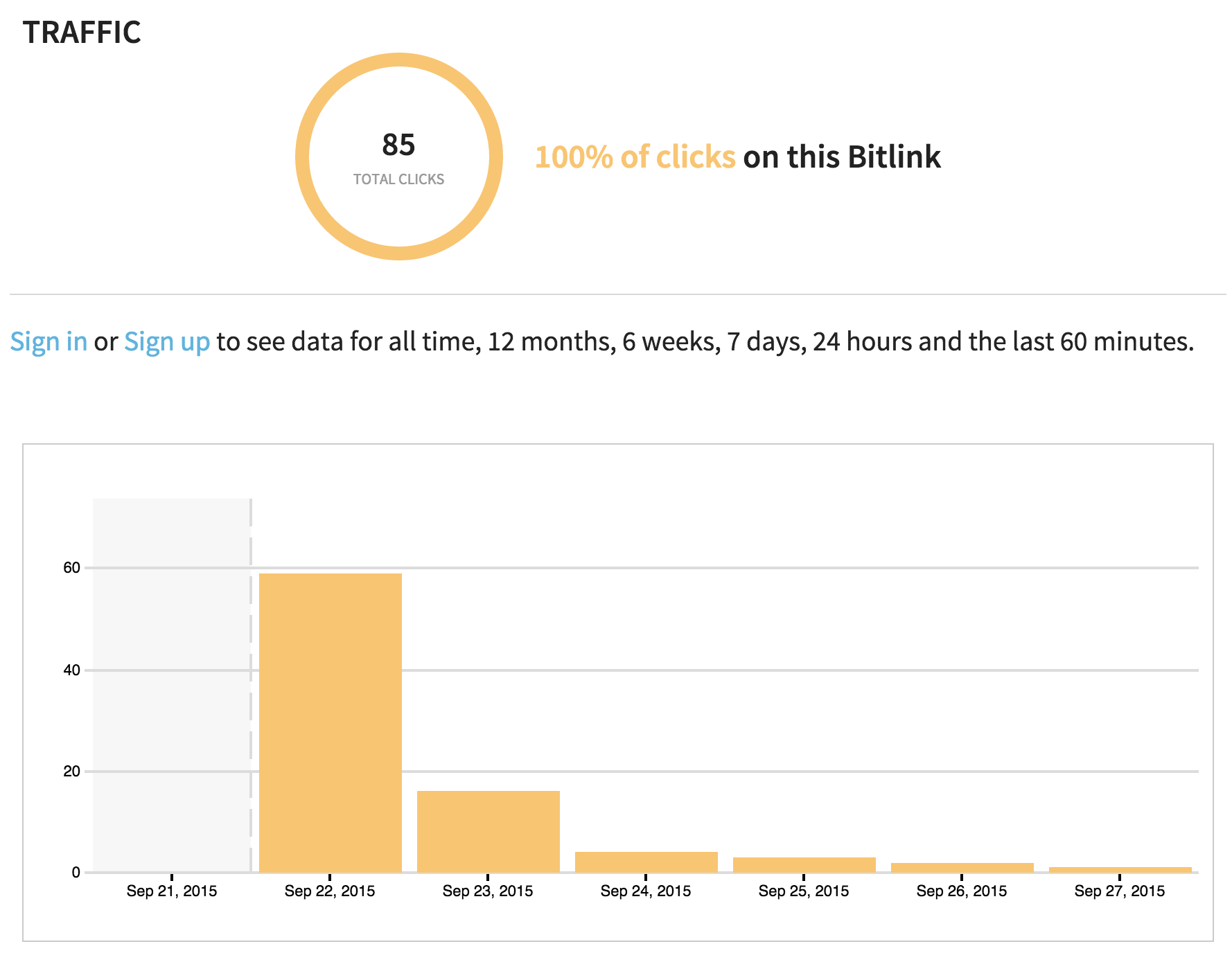 So there’s a little insight into the glamorous world of self-publishing. I suppose it’s like every other independent profession. You start at the bottom and work your way up. Just remember that all those cool stand-up comics you see on cable spent years doing late-night routines in depressing little clubs, getting heckled by obnoxious drunks. At least no one’s throwing beer cans at us writers while we work.

UPDATE - Sept. 1, 2021 - Good reviews and a good Amazon detail page can have a huge effect on the success of your promotion. My second book, Impala , won a number of awards and its Amazon page includes a number of good reviews. When I ran a promotion similar to the one described above, Impala rose to #16 in the Kindle store, moving over 10,000 copies in three days.