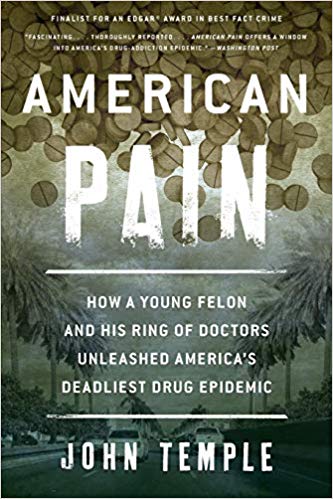 Chris George, the wealthy son of a successful South Florida builder, was running a semi-successful shop selling anabolic steroids when he started seeing pain clinics pop up all over Broward County around 2008. If he made decent money selling steroids, he figured, why not take a shot at selling opioids?

Chris was in his late twenties, and with one felony conviction under his belt, he wasn’t sure he’d be allowed to open a medical practice. When he looked into Florida’s regulatory codes, he learned that all he needed to legally sell OxyContin and other narcotics (see note below) was a business license and a doctor. He filled out a one-page business license application and put out an ad for doctors on Craigslist. In a few weeks, he opened the South Florida Pain Clinic in a strip mall on Oakland Park Boulevard near Fort Lauderdale.

Unlike the founders of competing pain clinics, Chris had a strong business background. He had managed many aspects of his father’s construction company, including marketing, logistics, supplies, and personnel management. He had a natural talent for bringing in new business, and for managing a growing enterprise. (If you’ve ever worked at a fast-growing startup, you’ll know how difficult it can be to manage growth, and to find a person who’s actually good at it.)

Chris advertised aggressively, running ads in local papers and putting billboards on the highways. The business grew beyond his wildest expectations. He had tapped into a market of desperate addicts far larger than he or anyone else knew existed. Patients came by the van load from Kentucky, West Virginia, Ohio, and other states. In the clinic’s crowded waiting room, they bribed their way to the front of the line, got their prescriptions, filled them right there at the front desk, then went out to the parking lot, crushed their pills and injected them. Some of them died on the car ride home.

The clinic moved twice as it outgrew its facilities. Along the way, it changed its name to American Pain, in an attempt to outrun the bad press that local media had attached to The South Florida Pain Clinic.

As the number of patients outgrew the waiting room at each location, junkies waiting for pills would loiter in the parking lot, angering neighbors and local businesses. Chris hired his friend Derik Nolan, another tattooed weightlifter with a penchant for steroids, to act as bouncer and get rid of the most problematic clients. Over time, Derik was pulling in five thousands dollars a week, all cash, in bribes from desperate patients who wanted to jump the line and get to the doctor ASAP.

Temple paints a portrait of the clinic that seems like something from the imagination of Carl Hiaasen. The doctors carried guns beneath their lab coats. Chris and Derik hired strippers to run the reception desk and collect payments. Chris paid for their breast implants. There was so much cash running through the clinic each day, the strippers collected it in garbage bags beneath the desk. Before Chris and his managers discovered the cash counting machines used by banks, the spent six hours a day just counting the bills they collected. One by one, the local banks stopped doing business with them, because they were uncomfortable seeing Chris and his managers walk in each day with a duffel bag full of cash.

If Hiaasen had written a novel about American Pain, his editor might have rejected it as over the top. But the story Temple tells is real, the details backed up by evidence collected by South Florida police, the FBI, and the DEA. The book relies heavily on interviews with Derik Nolan, the clinic’s enforcer, now serving a lengthy sentence in federal prison.

While the clinic’s tacky and outrageous excess comes off as a South Florida version of The Wolf of Wall Street, Temple dedicates several chapters to its victims. They are young or middle-aged, dead of overdoses or from collisions caused by driving under the influence of the pills.

The author also does a good job of tracing the enablers of the opioid crisis, from the clinic back up the chain to the truly powerful players. He looks at the prescription drug wholesalers who supplied American Pain, pumping millions of pills through a practice of five full-time doctors, and pretending there was nothing unusual about that. Temple notes that among all US states in 2010, Ohio had the second-highest number of OxyContin/oxycodone prescriptions–over a million pills in a single year. To illustrate the scale of Chris George’s enterprise, he notes that a single doctor at American Pain out-prescribed the entire state of Ohio.

Going further up the chain, Temple examines the pharmaceutical manufacturers who produce the pills. He describes Perdue Pharma’s long, coordinated campaign to convince America that chronic pain was a silent, under-treated disease to which OxyContin was the answer. Perdue spent an enormous amount of time and money persuading doctors to liberally prescribe their pills, producing misleading articles that showed opioids were not addictive.

At the top of the narcotic supply chain, Temple reports, is the DEA, which each year, in closed-door meetings, sets a limit on the total amount of opioids US pharmaceutical companies can legally produce. That number skyrocketed through the 1990s and early 2000s, as the pharmaceutical industry convinced the DEA of the soaring need for their product. Even now, as states have imposed tighter regulations and shut down mills like American Pain, the DEA continues to approve ever higher amounts of oxycodone production.

In 2014, as the number of opioid-related deaths in the US surpassed the number of deaths from motor vehicle accidents and the Centers for Disease Control declared opioid abuse a national epidemic, the DEA increased the production limit on legal opioids to almost 150,000 kilograms. That’s forty-two times the amount produced in 1993, when Perdue was preparing to launch its campaign to push OxyContin to the masses.

The DEA’s job, Temple reminds readers, is not only to stop the flow of illegal drugs, but to stop the diversion of legal controlled substances. The hundred and fifty thousand kilos that Big Pharma produces is still going somewhere, Temple notes. There simple aren’t enough patients in the terminal cancer and post-op wards to soak up that amount of narcotics.

If you don’t already know about the opioid crisis, this book will open your eyes. If you do know about it, this will sharpen your knowledge. As a tale of excess, American Pain is an easy read: fascinating, shocking, and cringingly entertaining. As a tale of individual and family devastation replicated on a vast scale throughout the country, it’s a tragedy. As a tale of greed, malpractice, and misgovernment, it’s an outrage.

Kudos to John Temple for putting this out there. Let’s hope this book pushes us toward a solution to a problem that we allowed to be manufactured.

Oxycodone is the generic name for an opium-derived narcotic that has been used to treat severe pain for over a hundred years. OxyContin is Perdue Pharma’s patented time-release version of oxycodone. It takes longer for the stomach to process, stretching out the drug’s pain-killing effects for a few extra hours. Some doctors prefer OxyContin’s longer duration when treating the pain of cancer patients who otherwise would not be able to sleep through the night. Until Perdue Pharma began its aggressive campaign to sell OxyContin as a general treatment for chronic pain, doctors reserved opioids for the palliative care of patients who were likely to die, and for the short-term treatment of acute post-operative pain. They avoided long-term opioid treatment for patients who were likely to recover because they knew that opioid addiction often became a problem worse than the disease they were treating.

North and Central by Bob Hartley
Dopefiend by Donald Goines
The Great Divorce – C.S. Lewis
The Bhagavad Gita: The Song of the God Retold in Simplified English
An Air That Kills by Margaret Millar
How To Make a Mess of Things
Writing and Selling
Wanda Wiley: Coming November 1, 2019