Black Money is the thirteenth book in Ross Macdonald’s Lew Archer series. It opens with Archer discussing the terms of a new case over lunch at a tennis club in the fictional coastal town of Montevista, CA, an hour or so south of Los Angeles. The client, Peter Jamieson, is twenty-four years old, rich, depressed, and increasingly fat as he eats away the sorrows of a broken engagement. 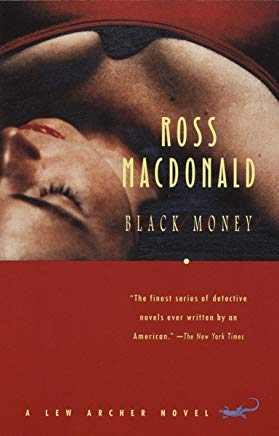 Jamieson wants Archer to investigate his former lover’s new fiance, a supposedly wealthy Frenchman named Francis Martel, who Jamieson and a number of others suspect is a fraud. Martel has somehow won the affections of Peter Jamieson’s next door neighbor, erstwhile fiancee and lifelong love, Ginny Fablon.

As in many of Macdonald’s books, Archer finds himself uncovering the secrets of a number of wealthy and supposedly well-heeled families to find that the troubles of the current case reach far back into the past.

Oscar Wilde once said that everything about art is important except the subject. Black Money, which on its surface is a detective story, is in fact another chance to examine mid-century American society through the unusually perceptive eyes of an empathetic but unsentimental realist. Lew Archer has witnessed enough in his years as an investigator to see through the veneer of society, to understand the pressures and disappointments that turn us away from our better selves, and to sympathetically analyze the motives people won’t admit even to themselves.

Books like this remind me why I read. I keep looking for this kind of depth in today’s mysteries, and I keep not finding it. Even Macdonald’s throwaway descriptions of minor events are three cuts above today’s best commercial writing.

When Lew Archer comes across the wrecked car of a minor character he fears has been murdered, he opens the trunk of the hulking old Cadillac and finds the man curled up inside, unconscious and badly beaten. “I got my arms under his shoulders and legs and lifted him out. It was like delivering a big inert baby from an iron womb.”

Archer has a keen eye for the pampered boredom and empty luxury of the rich who no longer have to work for their money. At Peter Jamieson’s tennis club, late in the evening, long after dinner and drinks:

The orchestra was playing again, and through the archway I could see people dancing in the adjoining room. Most of the tunes, and most of the dancers, had been new in the twenties and thirties. Together they gave the impression of a party that had been going on too long, till the music and the dancers were worn as thin as the husks of insects after spiders had eaten them.

Among other aspects of 1960s American civilization, Archer describes the cold, for-profit world of healthcare that was already devolving into the trainwreck it is today. He visits Mercy hospital to pay for the care of the beaten man he pulled from the trunk of the wrecked Cadillac. If he doesn’t pay, Mercy will transport the man to the county hospital, and as a local cop noted, “I’ve seen guys die on the ambulance ride from Mercy to County.”

So he goes into the hospital:

The cashier of Mercy Hospital had eyes like calculators. She peered at me through the bars of her cage as if she was estimating my income, subtracting my expenses, and coming up with a balance in the red.

“How much am I worth?” I said cheerfully.

Later, his description of the interior of a Las Vegas casino captures not only the grind of American working life in the mid twentieth century, but also our society’s slavish pursuit of gain and pleasureless addiction to pleasure. The front of the casino is lit by a three-story high flashing neon sign, a scorpion mechanically twitching its tail.

The people at the slot machines inside seemed to work by similar mechanisms. They fed in their quarters and dollars with their left hands and pulled the levers with their right like assembly-line workers in a money factory. There were smudge-eyed boys so young that they hadn’t begun to shave yet, and women with workmen’s gloves on their lever hands, some of them so old and weary that they leaned on the machines to stay upright. The money factory was a hard place to work.

The subject of Archer’s investigation, Francis Martel, does indeed have a shady background, and as the story progresses it appears more and more as if his wealthy young fiancee, Ginny Fablon, has not only made a bad choice in partners, but is putting herself in danger merely by being with him.

Archer interviews a broad swath of Montevista’s citizens, from the richest to the poorest, to piece together a picture of Martel’s actual identity, where he came from, and what he is after.

Along the way, he encounters Kitty Sekjar in a number of different locations and circumstances. Kitty is in her late twenties and remarkably beautiful. Though she’s dressed well and looks healthy, Archer understands immediately that she’s had a hard life with no one to depend on. In each encounter, she’s scared of him, thinking he’s going to kill her or turn her over to someone else who wants to destroy her. She attempts to seduce him as a means of survival and self-defense. In her world, a man is an inherently dangerous creature, and her only hope of controlling him is to direct his energy into some activity that will not immediately destroy her, regardless of how unpalatable or degrading that activity may be.

Macdonald sums up the desperation and precariousness of her existence in a simple exchange late in the book when Archer visits her house. Kitty is afraid that Archer is there to collect a five-thousand dollar bounty on her husband, the invalid who is no longer able to support her. Archer tells her he’s not interested in the bounty.

“Money isn’t the only thing in life.”

“That’s what I used to think, until this. What are you, a do-gooder or something?”

“I wouldn’t say so. I’m working at not being a do-badder.”

She gave me a puzzled look. “I don’t get you, Archer. What’s your angle?”

“I like people and I try to be of some service.”

Kitty isn’t any more selfish or mean-spirited than she needs to be. She’s simply had to spend so much energy on her own survival that it’s inconceivable to her that anyone would have the luxury of being able to consider the needs of others.

Ginny Fablon, the runaway fiancee Archer spends much of the book trying to find, comes from the opposite end of society, from the wealthy homes high in the hills overlooking the sea. She is poised, well-educated, well-spoken, and polished, a member by birth of the elite tennis club that Kitty wanted her whole life to join.

On the surface, they are opposites, with nothing in common but youth and beauty. While Kitty’s beauty is overtly sexual, wielded as both an asset and a defense, Ginny’s is quiet and modest. But in speaking with her late in the book, Archer observes:

And I thought that Ginny and Kitty, girls from opposite ends of the same town, had quite a lot in common after all. Neither one had quite survived the accident of beauty. It had made them into things, zombies in a dead desert world, as painful to contemplate as meaningless crucifictions.

“The accident of beauty” has two meanings here. Beauty is a gift bestowed by chance. And it’s a misfortune to be survived… or not.

The men noticed Ginny and Kitty in their teens, and then, regardless of who the young women thought they were or who they wanted to be, the definitions of who they would be were imposed on them. They were objects of desire, first and foremost. They had been made “into things” to be seduced, won, possessed. Ginny, in the land of wealth, had her suitors and seducers. Kitty, coming from the powerlessness of poverty, learned that her body was the only asset she could rely on. (And her husband literally won her in a craps game.)

Raymond Chandler’s detective, Philip Marlowe, would likely have looked down on these women. He would dismiss them as inconsequential, or as problems to be avoided, if he didn’t outright condemn them. John D. MacDonald’s Travis McGee would have slept with them. Jim Thompson’s psychopathic lawmen would have murdered them.

Lew Archer sees them as fully-fledged human beings, and has an empathy for them they haven’t even learned to have for themselves. That the people they might have been were stunted and distorted by men who valued them only for their physical beauty was “as painful to contemplate as meaningless crucifictions” in a dead desert world.

Compassion and depth of insight raise Lew Archer above his contemporaries in the realm of detective fiction. Macdonald’s fine prose and broad nuanced view of his characters elevate him above most other writers in the genre, especially those writing today.

Ross Macdonald stories depict basic human relationships falling apart, and because the people are real and fully formed, because we can relate to the everyday pressures they feel, his books have a deeper impact than the comtemporary bestsellers where the president is being kidnapped and the army’s latest weapon is stolen and the bad guys are threatening to blow up the city.

The stakes would seem to be much higher in today’s stories where the whole world is at risk and everyone is about to die. But it’s hard to feel the impact of those mass-produced plots and their mass-produced heros and villains. Because again, everything about art is important except the subject.

(Low)life by Charles Farrell
The Maltese Falcon
Black Wings Has My Angel
On Being a Self-Published Indie Author
Decline and Fall by Bruce Thornton
Pop. 1280 by Jim Thompson
A New Cover for Johnny Manic
Mutant Message Down Under