The Cut by George Pelecanos

I wanted to like George Pelecanos' The Cut, but it left me a little cold. I’m a huge fan of Elmore Leonard, and Pelecanos has a lot in common with the master. Both rely heavily on dialog to convey character, and both have a good ear for the language. Leonard’s characters come off a little sharper, at least compared to this book, in which the testosterone-drenched wise guys on both sides of law do too much posturing and smart-mouthing. 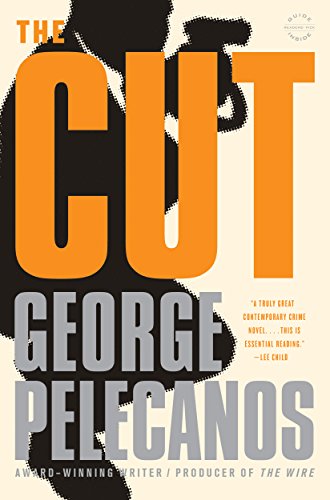 The story opens with Spero Lucas, a twenty-eight year old Iraq war vet, doing some good detective work for a criminal defense attorney in DC. His legwork helps a drug dealer’s son win acquittal on a charge of vehicle theft. The dealer, who is himself awaiting trial on more serious charges, calls Lucas into the DC jail and asks him to recover some stolen drugs.

Lucas is looking to make some money on the side, and this is good money. He’ll get a forty percent cut of whatever he recovers. He’s also looking for action. After laying his life on the line day in and day out in Iraq, it’s hard to come home to the prospect of life behind a desk, where there’s no risk and little reward.

If you’ve read many American crime thrillers, the idea of a freelance investigator/adventurer recovering stolen goods for a forty percent cut has to remind you of John D. MacDonald’s Travis McGee. McGee lived the ideal bachelor life, on a boat full of cold beer moored in a tropical marina frequented by beautiful and willing young women. He was South Florida’s James Bond, helping women in distress while offering some insightful and incisive commentary on American society and culture.

Spero Lucas lives in a harder world, with less chivalry, bigger muscles, meaner criminals, and more guns. The initial theft he’s asked to recover amounts to $130,000. You know this guy is walking into a mess when he chooses to stick his nose into that amount of stolen drugs, and part of you can’t help thinking he’ll deserve all the trouble he gets. You also know he’s going to put a lot of other people at risk along the way, but such are the mistakes of headstrong young men.

Lucas is smart and capable, and his combat experience in Iraq gives him an advantage over even the most seasoned and hardcore criminals he comes up against. As a protagonist, he’s more Jack Reacher than Travis McGee. It just so happens that’s not my taste. To fans of Reacher and Dirty Harry and the classic iron-willed vigilante types, I can say you’ll enjoy this book.

I like crime thrillers that have at least one of the following:

Pelecanos is famous, among other things, as a writer and producer for The Wire. I could see this story coming off well on film, with a good cast breathing additional dimension into the characters. But in novel form, The Cut, though it was good enough, didn’t quite hit the mark on any of the three elements that really draw me into a crime thriller.

One thing that Pelecanos fans like and I do not is the close (almost obsessive) attention to details of clothing, music, cars, and food. When Pelecanos sets a scene, he describes everything each character is wearing, from the shoes up to the hat, complete with colors and name brands.

Same with the cars they drive. Would you like to know the dimensions of the wheels? Well, you’re going to find out anyway. He also tells you what song they’re listening to, what album it’s from, and what’s so special about that particular tune.

When characters sit down to eat, which is often, you’ll get every ingredient of every dish from the appetizers on, what wine went with it, and whether the soutzoukakia had too much parsley or not enough.

He does this on purpose. It’s an essential element of characterization and one of the reasons his readers love him. It just happens to be something I don’t like because, over time, the meal scenes begin to read like menus and the clothing and automobile descriptions begin to sound like catalogs.

To understand what the author is conveying about a character who wears a t-shirt with the name of band A, while his wire-rimmed Tahoe blasts music from band B, as he thinks about that booty he hit last night to the thumping beat of band C, the reader has to know all those bands and what kind of music they play. Again, that comes off better in film, where it doesn’t matter if you’re unfamiliar with the music, because the director can pump it through the speakers for you as the scene plays out.

The most enjoyable part of the book, to my surprise, was the author’s faithful and meticulous rendering of my hometown. I grew up in DC and rode the streets for years as a bike messenger. I was there before, while, and after we were the murder capital. I remember when the cops switched from revolvers to Glocks. I remember Rayful Edmond and EU and the Kilimanjaro. I ate in many of the restaurants Pelecanos mentions, I know the owner of one of them, and lived in the neighborhood where much of the action takes place. I also knew the victim of an actual murder he mentions in passing.

This one didn’t quite do it for me, but I’ll check out his other books, especially the DC Quartet, which seems to have a cult following.

The Great Divorce – C.S. Lewis
Impala Wins Writer's Digest Award
To Hell with Johnny Manic is Now Available on NetGalley
The Late Monsieur Gallet
Gate 76 is available for pre-order
E-books and Pricing
Impala Is Here!
We Germans by Alexander Starritt