Wives and Lovers by Margaret Millar

Margaret Millar was best known for her mystery and suspense novels. Wives and Lovers, published near the height of her career in 1954, is somewhat of a departure. The story takes place in Channel City, a thinly veiled version of Santa Barbara where Millar lived with her husband, mystery writer Ross MacDonald. 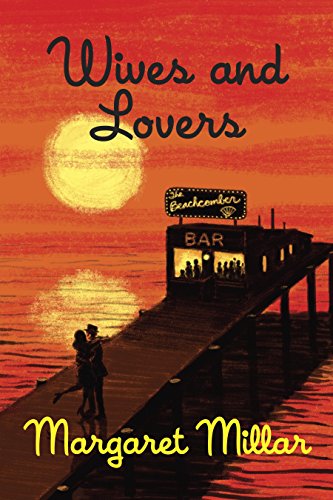 If you come to this this book expecting a hook and an immediately engaging plot, you’ll be frustrated. Wives and Lovers is set of interwoven character studies and a sociological portrait of a fairly wealthy small city in mid-century California. The value of the book lies in Millar’s exceptional depth of insight, the richness and complexity of her characters, and the eloquence and grace of her writing. You have to slow down to read this one, and it’s well worth it.

The primary characters are Gordon Foster, the dentist; his assistant Hazel Anderson; Hazel’s ex-husband, George; Gordon’s wife, Elaine; Gordon’s lover, Ruby; and Hazel’s housemate Ruth. The book also includes a number of richly drawn minor characters, including the boardinghouse landlady, Carrie Freeman, and the Superior Court Judge, Anton Bowridge. With the exception of the older Bowridge and the young Ruby, all of the characters are middle-aged, and all are working through the adjustments of midlife, recalibrating hopes and attitudes after finding the lives they had expected didn’t pan out.

Mrs. Freeman’s attitude at the arrival of her new tennant, Ruby, sums up the weariness and wariness many of the middle-aged characters are struggling against: “She peered down at the car with the look of chronic suspicion that landladies acquire after years of people.”

Millar creates a sharp contrast between the misery of those who refuse to forgive, and the grace of those who put in the hard work of understanding and forgiveness. She probes each character in turn and shows how the rigid and intolerant are psychologically incapable of joy or even happiness, how they are toxic to those around them, not just creating but also compounding their own troubles and the troubles of the world.

This novel would not–could not–be published today under a mystery imprint. It’s literature with a capital L, and not the precious or pretentious kind. It simply examines the many facets and ordinary characters of a world we already see and reveals in it a depth and richness we rarely take the time to discover. There’s too much in here to absorb in a single reading, so this one is on my list to read again.

Blood on the Moon by James Ellroy
The Big Bite by Charles Williams
The Great Divorce – C.S. Lewis
Devil in a Blue Dress
The Siege of Pleasure by Patrick Hamilton
Producing a Book Is a Lot of Work!
The Slaves of Solitude by Patrick Hamilton
What's Wrong with Genre Fiction?