Dopefiend by Donald Goines opens in a shooting gallery on the east side of Detriot. The time is around 1970. The obese drug dealer, Porky, sits in an easy chair watching his customers shoot up, nod off, scratch themselves, and bleed. 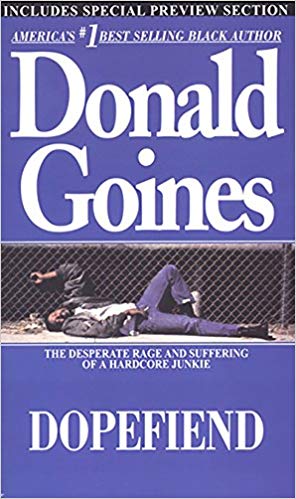 Goines, himself a heroin addict, describes the scene in disturbing sensual detail, with the dirty works and clogged needles soaking in water glasses, the blood-stained floor, and the stench of human filth rising from junkies too far gone to take care of themselves.

In the second chapter, Goines introduces Teddy and Terry, a couple in their twenties who are about to descend into this hell. Teddy doesn’t work, and has been using long enough to have formed a habit. His girlfriend Terry is from a solid middle-class family and has never used.

Porky sees in the clean, attractive, light-skinned Terry a potential new customer. He gives her a free sample of heroin, and he and Teddy pressure her into snorting it. Teddy has no ill intent toward his girlfriend. He justs wants her to join him in one of this favorite pleasures.

Porky’s intent, however, is much darker. The innocence of this lovely, privileged young lady arouses him. He wants to hook her and drag her down to the level of the desperate prostitutes sprawled out around him. He’s not interested in just having sex with her. He wants to degrade and humiliate her in front of everyone.

Porky is one of the most evil characters in all of fiction. After a lifetime of rejection and ridicule, he finds his power in heroin. Anyone he can hook, he owns, and he takes delight in proving his ownership by forcing his addicts to debase themselves in front of him, by commanding them to engage in grotesque sexual performances while he leers with a mixture of delight and contempt.

From chapter two on, the book paints a fuller picture of the world of heroin and prostitution in eastside Detroit, tracing the paths of Teddy and Terry’s decent into that world. If you’ve ever been close to a heroin addict, you’ll find this book a painful read–not because it’s bad, but because it’s so dead-on accurate.

Teddy, who already has a problem when the book begins, just gets worse. He lies to his family to get money. He commits a series of petty thefts that escalate into major crimes, all to feed his addiction.

Terry, who has further to fall, tells herself at first that she doesn’t have a problem, that she just wants a little more. Soon, she is lying to her parents and committing little crimes of her own, which will eventually cost her dearly.

In his portraits of these two characters, Goines shows how the drug comes to own its victims, who eventually give up on getting high and just want to avoid the insufferable dopesickness they wake up with each morning. One by one, Terry’s principles fall to the increasingly urgent need to stop the physical torments of withdrawal.

Her life and Teddy’s are no longer guided by rational actions, but by desperate physical reactions. This is exactly where Porky wants them. He indulges his hatred of humanity by surrounding himself with people more miserable than himself, junkies he has manufactured and can control. “Better to rule in hell,” as Satan put it, “than serve in heaven.”

What makes this book so powerful is Goines' description of the desperation of the junkie’s day-to-day existence. He vividly portrays the addict’s neediness, the deceit and betrayal they practice against those closest to them, and the agony of their shame as they realize what they are doing but are unable to stop themselves.

As a character, Porky may be over the top, but he is a perfect personification of what a cruel and depraved master heroin is to its victims. Goines' characters are complex and fully formed. His dealers, addicts, prostitutes and enforcers are not the one-dimensional bad guys of contemporary mass market crime fiction. They are plagued by fear, insecurity, and doubt. They have sympathy for the weakness and suffering of others. Goines does a good job of bringing the reader into their world and making the reader understand at a visceral level the desperation that motivates them.

The plague that Goines portrays in early 1970’s Detroit has been playing out in a different form over the past twenty years across a wider swath of the US, as Big Pharma has replaced Porky to bring the scourge of opiate addition to rural America. If you know any addicts and are struggling to understand them, this book might help you, but it will be a painful read.

You Play the Black and the Red Comes Up by Richard Hallas
The Expressman and the Detective
IndieReader's Review of Warren Lane
The Ministry of Fear by Graham Greene
Wanda Wiley: Coming November 1, 2019
The Stepford Wives
Amazon Names Impala One of the Best Books of September
Fahrenheit 451 by Ray Bradbury