No Country for Old Men

I finally got around to reading this, three years after it was recommended to me by a pair of retired federal agents who had spent much of their careers pursuing drug runners in South Texas. 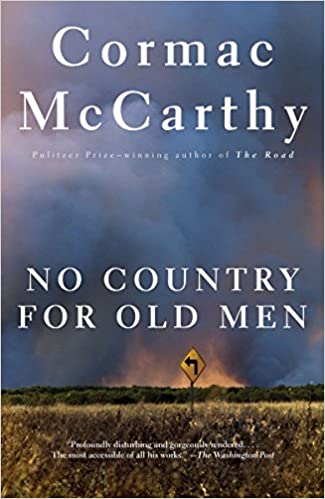 No Country for Old Men opens with Anton Chigurh, one of the most pitiless and chilling figures in modern fiction, escaping a police station after his arrest. From the ease with which he kills the deputy, it’s clear that local law enforcement in South Texas in 1980 isn’t prepared to handle such ruthlessly efficient criminals. Sheriff Ed Tom Bell, the only first-person narrator in the book, spends a lot of time ruminating on what kind of world would produce this new breed of criminal, and on the destructive effect of having such evil at large in society.

The next scene shows us Llewellen Moss hunting antelope on a wide-open floodplain just north of the Mexican border. Moss is an expert shot, a Vietnam vet, and a tough outdoorsman. In pursuit of his quarry, he stumbles across the scene of a massacre: two vehicles in the middle of the desert plain, far from any road, with everyone inside shot to pieces. When Moss spots a trail of blood leading away from the scene, he tracks the wounded shooter as he would an antelope. He finds the shooter dead from his wounds some distance away, and with him, the cause of the shootout: a satchel containing over two million dollars in cash.

Moss scans the empty desert. There’s no one in sight. Why not take the money?

Now we have our set up: Moss, the good man who may have made an unwise decision, and Chigurh the pitiless killer. Both are hunters in their own way, both good with guns, and both unusually adept at survival.

Sheriff Bell happens on the scene after the fact. He finds the dead in their four-wheel drives, knows that a great deal of drugs and money are missing, and understands that one or more people escaped the scene alive. He soon surmises that local boy Moss has the money, and that a number of ruthless characters will hunt him down. He sets out to find Moss, to at least warn him that’s he’s up against some very dangerous people.

As far as crime thrillers go, No Country for Old Men is absolutely top-notch. I can’t say I’ve read every thriller out there, but this has to be among the best ever written. McCarthy’s lean prose conveys the essential details of each scene, each action, with tremendous impact. There’s not a wasted word anywhere. (The author disposes of unnecessary punctuation as well. The book includes no quotation marks, and omits most apostrophes and commas as well.) The result is a powerful experience for the reader. You’re not reading a description of a story, you’re in it, living it.

While it excels as a thriller, No Country aims much higher than even the best of the genre, providing commentary through the eyes of Sheriff Bell on the decay of American society, the spread of drugs and violence, and their toxic effect on society and civilization. Bell can see this more clearly than most because he’s older, he’s been around a long time and was raised in an orderly world very different from the one he finds himself in today.

“I think if you were Satan,” Bell muses, “and you were settin around tryin to think up somethin that would just bring the human race to its knees what you would probably come up with is narcotics.”

He picks up the thread again later, noting that drugs are simply a symptom of an illness at the core of society itself. “It’s not even a law enforcement problem. I doubt that it ever was. There’s always been narcotics. But people dont just up and decide to dope theirselves for no reason. By the millions. I dont have no answer about that. In particular I dont have no answer to take heart from.”

Anton Chigurh, whose cold logic and unflinching ruthlessness was portrayed so well in the film by Javier Bardem, represents not only the violence of the drug cartels, but the seemingly unstoppable advance of the forces of destruction that are eating away American society from the inside.

In one scene late in the book, Chigurh tells a high-level drug dealer, one of the kingpins, if he wants to continue doing business, he’ll have to do it with Chigurh.

“What happened to the old people?” asks the kingpin.

Chigurh says euphamistically, “They’ve moved on to other things. Not everyone is suited to this line of work.”

“And you? What about your enemies?”

“I have no enemies. I don’t permit such a thing.”

And that’s true. As a matter of principal, Chigurh simply kills anyone who’s interests are not in line with his own.

Sheriff Bell understands this. He understands the nature of the destructive forces he’s worked his whole life to contain. He feels they’ve grown throughout his lifetime, reaching the point where they’re impossible to contain. And they’ll continue to grow, a plague to future generations who will never know what this country once was. “Good people,” Bell says, “are easy to govern. And bad people can’t be governed at all.”

Sheriff Bell’s personal crisis is a microcosm of America’s civil and social crisis, while the riveting external story of Llewellyn Moss and Anton Chigurh acts out the battle for a nation’s soul.

In case you don’t know, the title of McCarthy’s book comes from the opening line of William Butler Yeats' poem “Sailing to Byzantium,” in which an old man turns his weary back on the living world whose pleasures no longer delight him and contemplates instead the golden art of the Byzantine empire.

McCarthy’s novel is the story of what, in today’s world, drives a man to this point of resignation and retreat. While the action between Moss and Chigurh are more than enough “to keep a drowsy Emporer awake,” Bell’s brooding reflections on “what is past, or passing, or to come” are the heart of the book.

If you haven’t read this one yet, put it on your list. It will stick with you.

Devil in a Blue Dress
The Man in the High Castle
The Art of the Cover Letter
Black Wings Has My Angel
A Travesty, by Donald Westlake
The Woman in White by Wilkie Collins
Discover Great Reads on Shepherd.com
No Country for Old Men