The Hiding Girl by Dorian Box

The Hiding Girl begins with an ominous scene. Two men, whom our gut tells us are not to be trusted, approach a woman and her daughters as they carry groceries into their isolated country home. Twelve-year-old Emily has the same foreboding instinct as the reader. Something bad is about to go down. But her mother is too trusting and her sister is too young to share her concern. 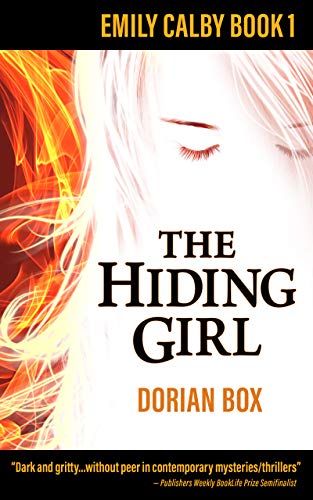 Something bad indeed goes down, and Emily is the only one to escape alive. Traumatized, hyper-alert, and stuck in survival mode, she goes on the run. She knows her family’s killers are aware that she escaped, and she fears they’ll come after her. She also wants revenge.

In the course of her travels, she befriends Lucas Jackson, a trained soldier and former gang member from South Memphis who also lost his family to violence. The two form an uneasy bond that grows and deepens over time. Lucas trains the fiercely determined and strong-willed Emily to defend herself. Emily vows to use her training to exact revenge on her family’s assailants.

In her traumatized state, her psyche splits into three. The Hiding Girl, The Calm Girl, and The Crazy Girl. Each of these three instinctively knows when to take over to ensure Emily’s survival. Crazy girl gets her into some harrowing situations. Calm Girl, Hiding Girl, and Crazy Girl take turns getting her out.

What sets this book apart from the rest of the vigilante justice genre is its deep characterization of Emily and Lucas, and its honest look into the psychology of a fractured mind. Emily is a rare find in thriller fiction, a protagonist you’ll both cheer for and cry over.

The author does a superb job of building tension and of showing how Emily’s fractured psyche leads her into situations whose danger she doesn’t truly recognize even as the horrified reader does. The climactic scenes are riveting, tense, disturbing and cathartic.

The closing chapters of the book deal with a thread of the story that most thrillers gloss over or ignore: the injured protagonist’s need for emotional healing. This section of the book is intelligent, insightful, and moving. As a thriller, The Hiding Girl holds its own with the best of the genre. In its denouement, it outshines all its peers. Emily is still a human being, and whatever the outcome of her quest for vengeance, she still has a lot to work through internally, and she has the strength and the guts to do it.

The Hiding Girl is the first in a promising series. Emily has the resourcefulness of a river determined to reach its destination. When one path is blocked, she finds another. I look forward to the next installment. Pick up a copy of The Hiding Girl and you will too.

I Was A Spy by Marthe McKenna
The Hot Spot by Charles Williams
IndieReader Names Impala one of the Best of 2016
Then She Was Gone by Lisa Jewell
1414° by Paul Bradley Carr
Irrational Man by William Barrett
The Troubled Man by Henning Mankell
Paris, Sept. 2017