ReadersFavorite.com announced the winners of their 2017 awards contest yesterday. Impala won the gold medal in the General Mystery category. Here’s a screenshot from the awards page, showing Impala with its alternate cover: 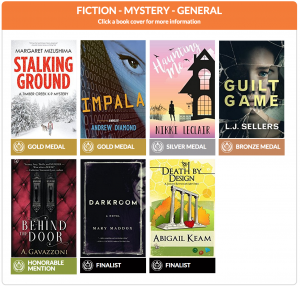 The writing life can be lonely and isolating, with discouragement at every turn. So it’s nice to get some recognition now and then.

When I finished writing Impala, I sent copies out to a number of reviewers and contests. One of those contests sent me a private review of the book, giving it F’s across the board. (That’s F like on a school report card. F as in Failure.) The reviewer gave it an F for plot, F for characterization, F for originality, and F for the overall quality of the writing. (That last F, by the way, really pissed me off. I taught high school English for a while, and I know what F writing looks like.)

Then one of the book’s first Amazon readers left a scathing two-star review. Try putting a year of work into something and then getting that response.

Having a day job is much easier than writing. At your day job, people don’t walk up to you and say, “Hey, I just took a look at that project you’ve been working on, and boy does it suck! Oh my God! I had no idea how stupid you are.”

In some ways, the reader-writer relationship is like dating. When you hit it off with someone, it feels like magic. And when there’s a gross mismatch and you just can’t connect, it’s awkward and painful.

Many of the things that those first reviewers disliked about the book were singled out for praise by later reviewers. And most readers seem to like the book. I’m thankful for that.

I’m currently waiting for my latest book to come back from the editor. I’ll do some revisions on that, and then I’ll send it out into the world and hold my breath, the way you might just before you go on a blind date. You know that feeling? Anticipation and dread, all mixed together, as you think about all the ways it could go right and all the ways it could go wrong.

The new book is tentatively titled Gate 76, and you can read the first chapter here.

You can find Impala on Amazon and Barnes and Noble .

How To Make a Mess of Things
Summary of an E-Book Promotion
How's this for coincidence?
Impala Wins Writer's Digest Award
Iceland, June 2016
Impala Summary Poll Results
The Greatest Hoax on Earth by Alan C. Logan
Everything Noir