Two things struck me while reading John D. MacDonald’s The Deep Blue Good-By. The first was the quality of his writing, which can be witty and insightful, and is never cliché. The second was how, especially in the case of this book, the hard-boiled detective genre can pander to male fantasy in the same way romance panders to women. 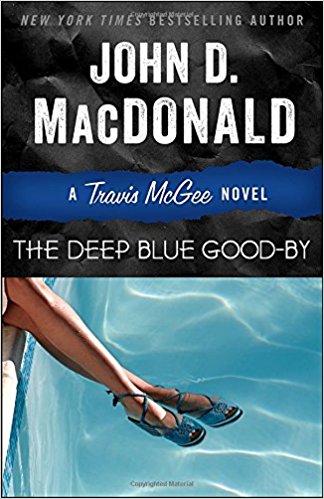 In this book, every young woman between puberty and thirty practically throws herself at the protagonist, Travis McGee, who who lives on a boat and seems interesting and likable in some regards, but just doesn’t seem to have that much going for him. It’s easy to mock those cheesy romance novels that sell for 99 cents on Amazon, where every guy seems to have tattoos, six-pack abs, a rebel bad-boy streak, and a ready erection. But in MacDonald’s book, which has been widely praised as a work of art, every woman is just a hole waiting to be filled. Every woman is well-built, willing, tipsy, and half nude, when she’s not completely nude.

I get that this was written in the early sixties, when the birth control pill first appeared, and women were exploring the newfound freedom of sex-without-consequences. This was about the same time as Mad Men, and with regard to male-female relations, The Deep Blue Good-By has a skewed perspective similar to the one portrayed in Don Draper’s world.

I get the whole living-on-a-boat thing. I’ve seen enough of that lifestyle in South Florida and in the Caribbean to have a first-hand knowledge of the dissolute ways of the sun-drunk layabouts. They drink a lot, and they have more sex than mom and dad who come home tired from the office at 6PM. But seriously, no matter how bored a woman gets, it takes more than just a complete stranger showing up at her door with a bottle of liquor to get her interested. You might run across one woman, once in a great while, who’s willing to jump in bed with whoever happens by on a lazy afternoon, but the next thousand won’t be like that.

In MacDonald’s book, they’re ALL like that. Even the ones who just got raped. And that’s just wrong. That just doesn’t happen.

Travis McGee is living the ideal guy’s life. He has no job, but enough money to get by. He has no responsibilities, no commitments, no emotional ties, and whenever he wants a little action, he just strolls on over to one of the neighboring houseboats, where there’s always a party, and picks out a woman to bring home. And he actually complains that they’re not fulfilling. Just flip the genders of the protagonist and harem here, and you have a romance novel. Except that a romance novel ends with the traditional woman’s fantasy, where the main character gets to keep her one-and-only forever on after. This one ends with the traditional man’s fantasy, where the guy ends up unattached with nothing to get in the way of his continued booty hunt.

Other books in the classic pulp/crime genres include a good bit of sex as well, but it’s not quite so over-the-top as here. Jim Thompson’s protagonists usually have a steady, adoring girlfriend, and a second woman on the side. But in Thompson’s case, the protagonist is usually somewhat insane, and his “other woman” is insane in some catastrophically complementary way, like nitro and glycerine. Many of the better books in the genre, like Elliott Chaze’s Black Wings Has My Angel and Kenneth Fearing’s The Big Clock, follow a formula in which one particular man plus one particular woman equals disaster.

The overall plot of The Deep Blue Good-By is nothing ground-breaking. It’s genre fiction, after all, and a hard-boiled detective novel ends with the wise and cynical detective outsmarting the wily and dangerous bad guy. Plots aren’t that big a deal in genre fiction. They have to have twists, but we all know how they’re going to play out. Romance novels end with the woman getting her man, just as surely as thrillers end with the good guys sticking it to the bad guys. It’s how it all plays out that keeps our interest.

And McGee, for all his flaws, is consistently interesting. When you dive into this novel, you dive into his world, and you get to live there for a while. Although McGee can be quite insightful, you know his view of the world is skewed and unreal, just like you know the world in a Carl Hiaasen novel is skewed and unreal. You’re there for the ride, and McGee makes the ride worth the effort.

MacDonald’s rich style brings characters and places vividly to life. However, it’s a bit too elaborate for some of the action scenes. Sometimes you get to the end of a thirty-word sentence, and you wonder, “Wait, did he hit the guy or not?”

If you want a little flavor of his writing, and of McGee’s perspective and insight, the long paragraph below is a shining example. McGee has just been flirting with a waitress in order to get some information out of her. She’s very young. Nineteen or so. And of course, she comes out of the encounter desiring him (of course!), but he’s not interested.

The references to rabbits and bunnies are double-edged. McGee has already talked about people breeding like rabbits, and the vast space America still has to absorb its booming population. He’s also referred to some of the young women he’s picked up from the houseboat parties as rabbits, because each one is just a quick, impersonal lay.

Here’s what’s going through McGee’s mind when he walks away from that 19-year-old waitress he was just flirting with:

Bless them all, the forlorn little rabbits. They are the displaced persons of our emotional culture. They are ravenous for romance, yet settle for what they call making out. Their futile, acne-pitted men drift out of high school into a world so surfeited with unskilled labor there is competition for bag boy jobs in the supermarkets. They yearn for security, but all they can have is what they make for themselves, chittering little flocks of them in the restaurants and stores, talking of style and adornment, dreaming of the terribly sincere stranger who will come along and lift them out of the gypsy life of the two-bit tip and the unemployment, cut a tall cake with them, swell them up with sassy babies, and guide them masterfully into the shoal water of the electrified house where everybody brushes after every meal. But most of the wistful rabbits marry their unskilled men, and keep right on working. And discover the end of the dream. They have been taught that if you are sunny, cheery, sincere, group-adjusted, popular, the world is yours, including barbecue pits, charge plates, diaper service, percale sheets, friends for dinner, washer-dryer combinations, color slides of the kiddies on the home projector, and eternal whimsical romance–with crinkly smiles and Rock Hudson dialog. So they all come smiling and confident and unskilled into a technician’s world, and in a few years they learn that it is all going to be grinding and brutal and hateful and precarious. These are the slums of the heart. Bless the bunnies. These are the new people, and we are making no place for them. We hold the dream in front of them like a carrot, and finally say sorry you can’t have any. And the schools where we teach them non-survival are gloriously architected. They will never live in places so fine, unless they contract something incurable.

That paragraph shows many of McGee’s most fundamental characteristics. He feels both empathy and contempt for the troubled people around him. He laments the unfulfilled promise of their lives, but he doesn’t mind taking advantage of them when it suits him. Even in the end, when he restores a tiny measure of justice to a badly wronged woman, he’s just gotta get a piece of booty for his trouble, because, hell–it’s what she wants.

I look forward to reading more of MacDonald’s work. I just hope that in subsequent novels, McGee’s blood starts flowing a little more toward his heart and mind, a little less toward that other place.