Emily Calby is twenty now. The scarred but ever-hopeful survivor wants to put her brutal past behind her. Her instinct for justice has led her to enroll in law school on the sunny Florida coast. Things are finally looking up. 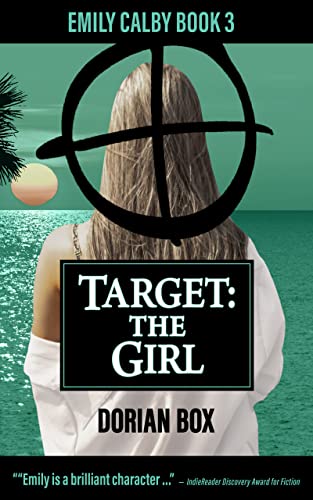 “I spread my arms and tilt into the bright Florida sun, filling my lungs with the wet salty air. ‘What could possibly go wrong in a beautiful place like this?'”

Well, Emily… it seems that trouble has a way of finding you.

On day one, you manage, through no fault of your own, to get on the bad side of legendary and eminently cranky Professor Nemworth. The arrogant Dale Olson seems to have it out for you because he just can’t stand the idea of a girl who’s smarter than him. Brady Chapman, “God’s gift to women,” can’t get it through his head that you’re not interested. Someone is stalking you, and your vibe is right about that woman Christina. But, for once, you may have actually underestimated how bad a person is.

At least Henley is nice. And Nemworth, despite his hard shell, is actually human. He won’t show it, but you can see it, because you’re naturally tuned in to the humanity and vulnerability of those around you.

And don’t forget, Lucas has your back. He told you when he dropped you off that if you needed anything, just call.

All those tools you wanted to put away after prison–the ability to fight, the willingness to kill–you’re going to have to dig them out one more time. The stalker is closer than you think, and more disturbed. Nemworth needs your help. Those very bad people who are used to getting away with things, the ones who ruin other people’s lives, underestimate the resources and determination of the unremarkable-looking blond-haired girl.

And none of them know about Lucas.

The storm brews slowly in this darkening thriller. If you like a heroine who’s as human as she is tough, whose sense of justice is unyielding and unerring, who’s trying her best to be the good person she wants to be, you’ll like this one.

The Slaves of Solitude by Patrick Hamilton
What's Wrong with Genre Fiction?
Blood on the Moon by James Ellroy
One Fearful Yellow Eye
The Maltese Falcon
Why I've (Mostly) Stopped Reading the News
I Am Legend by Richard Matheson
Red Harvest by Dashiell Hammett