This is the first I’ve read of Simenon’s Maigret series. I can’t believe the author was only twenty-eight when he wrote this. His writing has a surety and solidness that many never achieve. The few who do find it take many years to get there. 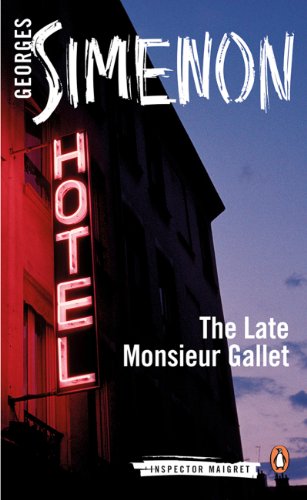 This case involves what appears to be the simple murder of a traveling salesman in a Loire Valley hotel during the hot summer of 1930. Maigret approaches the investigation with the dread of one assigned a sordid, depressing, and tedious task. The wife of the deceased is proud and disagreeable, the son cold and distant, the hotel a second rate holiday stop for families on a budget.

Maigret discovers that the late Monsieur Gallet had been a frequent guest of the Hotel de la Loire, where he was known as M. Clément. Why not use his own name? Maigret suspects the usual: the traveling salesman, who spent three weeks of each month on the road away from his wife, must have had a mistress in town. Possibly a child as well. Something went sour and Gallet wound up with both a bullet in his head and a knife in his chest. At the root of every double life, every extended deception, Maigret reflects, is always some great passion.

But none of the clues point to an affair. In fact, they all point in different directions. The case becomes almost maddening for the detective who has seen it all. He goes back and forth between the Loire Valley, Gallet’s house on the outskirts of Paris, and neighborhoods of the city itself, where Gallet’s son and his mistress live. The more people he talks to, the more evidence he gathers, the less sense he can make of things.

Simenon does an excellent job of exposing tantalizing clues, each one seeming to contradict the last. The reader is always grasping alongside Maigret to assemble a coherent world from parts that don’t fit. The mystery itself unfolds in the spirit of Agatha Christie and Sherlock Holmes: it’s an intellectual puzzle to be brooded over, its pieces touching on every aspect of the victim’s life.

As in the works of Ross MacDonald, the investigation brings the reader into contact with characters from every social and economic level of society. Like Lew Archer, Maigret has an intuitive understanding of the people he interviews, and of the fundamental human motivations and desires that transcend all social lines. Maigret and Archer are keen observers and reporters, though Maigret comes off as more gruff and irritable.

He’s also somewhat above the case he’s investigating, collecting and assembling the puzzle pieces more in the manner of Holmes than of Lew Archer, who often finds himself in dangerous confrontations with the criminals he’s investigating. As with many of Archer’s investigations, Maigret finds that the roots of the Gallet murder stretch far into the past.

I won’t give any spoilers, but suffice it to say the plot becomes quite complex and convoluted. The reader may begin to suspect certain characters, but even a seasoned mystery buff will not be able to guess the truth of what has happened.

In the end, Maigret is faced with a moral decision akin to that of Charlie Marlow in Conrad’s Heart of Darkness. When is it appropriate to tell the truth? When is it not?

Simenon is my kind of writer. He doesn’t waste words. He simply presents the world he sees in clear, evocative prose. The man published nearly five hundred novels. Toward the end of his life, when an interviewer asked him how any one man could produce such a huge body of work, Simenon replied without hesitation, “I’m a psychopath.”

Short, and to the point.

Initial Cover for The Friday Cage
My Cross to Bear by Gregg Allman
Discover Great Reads on Shepherd.com
Stoner by John Williams
In Memory of O'Neil McGean
The Long Dry by Cynan Jones
Beast in View by Margaret Millar
Irrational Man by William Barrett