Black Wings Has My Angel

Back in the 1990’s, I wandered into Twice Sold Tales in Seattle, and the clerk asked if she could help me find anything. I wasn’t really looking for anything in particular, so I said, “How about something dark? That I can’t put down.”

She lit up and said, “Oh. Have you read Jim Thompson?”

She showed me a shelf of titles from Black Lizard, and I picked Pop. 1280. I studied English in college, and had done plenty of reading, but that was the first book I ever found that I literally could not put down. I started reading it late at night, and finished near dawn. I recently re-read the book, and it was just as good the second time around.

The editor at Black Lizard who brought Thompson’s books back into print was a guy named Barry Gifford. If you ever saw or read Wild at Heart, that’s his work too. I have to say, I’m grateful to him for rescuing all those books from oblivion.

Gifford recently wrote the introduction to the New York Review of Books' reissue of Elliott Chaze’s Black Wings Has My Angel. In the intro, Gifford says that during his years at Black Lizard, this was the title he most wanted to publish. I can see why. How did this one get lost in the first place? And why had I never heard of Chaze before? Was it because he, like Thompson, was writing for the dime-store pulp publishers? 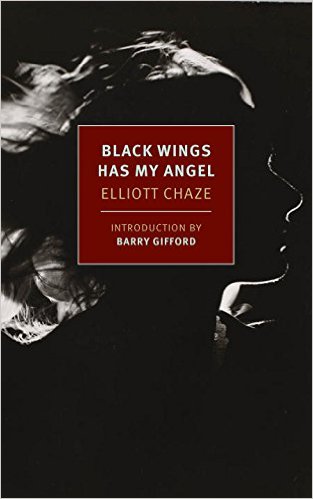 Black Wings opens with escaped convict Timothy Sunblade finishing up some roughneck work on an oil rig in Louisiana. He’s got enough cash to make his way out West, and he’s got a plan in mind for a heist that will set him up for life. But the partner who helped him plan the heist didn’t survive the prison escape, so he has to find someone else. After all, it’s a two-person job.

Before he leaves town, he goes to a hotel for a bath and some relaxation. He asks the bellhop to find him a hooker, and the bellhop returns with something more than he expected. Sunblade says:

[I] wanted to tell her the bellhop had me all wrong, that what I wanted was a big stupid commercial blob of a woman; not a slender, poised thing with skin the color of pearls melted in honey.

As you can guess, Sunblade soon learns that this black-winged angel is as tough and steady as any partner he could have hoped for. Over time, he lays out the plan, and she’s in.

I won’t give away any more than that. But I will say this is one of the best crime novels I’ve ever read. It’s up there with Jim Thompson’s best, and it shares some similarities with his work. The prose is strong, and the voice is compelling. There’s no wasted metaphor, as there is in so much crime fiction, where the narrators seem to throw in comparisons that give the story a hard-boiled flavor but don’t make much sense or add any insight.

The characters in Black Wings are deep, compelling, well drawn, and psychologically complex, even by the standards of the best literary fiction. There’s a reason why the New York Review of Books, which has republished the brilliant works of John Williams, among others, chose to republish this. It’s quite unusual to see dime-store pulp picked up by a literary publisher, but the book is that good, and it gives you the best of both worlds: the lurid thrill of pulp, and the depth of true, masterful writing.

The two main characters, and the extraordinary relationship between them make the book memorable. Timothy Sunblade reveals himself through first-person narration as a man who is clear-eyed, thoughtful, disillusioned, sensitive, brutish, sure of himself at times and wavering at others. Virginia is revealed both through Sunblade’s perspective and her own words. She’s an unusually rich character: at times wise, world-weary, sure of herself and what she wants, and at other times crazed, like a caged animal, but always strong.

The story provides a rich depiction of time and place. It’s set in about the same year as it was written, in the early 1950’s. The action takes place mostly in Louisiana and Colorado, where the author, Chaze, lived and worked. The atmospheric detail of the location and landscape adds depth and presence to the story. Many authors don’t handle that location well, writing long descriptive asides about the townspeople or the countryside that distract from the story, or seem pretentious and writerly. Here, every word of description brings you closer to the characters and the story.

The arc of the story, as in many of Thompson’s novels, is one of darkening fate, and inevitable tragedy, in which flawed characters let their weaknesses get the better of them. Watching their slow descent is like watching a train wreck in slow motion. The characters continue to deepen throughout the story, all the way to the final page.

If you like a good noir, and good writing, check this one out. It’s one of the best, and it’s one that sticks with you.

Decline and Fall by Bruce Thornton
In a Lonely Place by Dorothy B. Hughes
Bring Him Back Dead by Day Keene
(Low)life by Charles Farrell
The Bhagavad Gita: The Song of the God Retold in Simplified English
We by Yevgeny Zamyatin
Collected Millar: The Master at Her Zenith
Gate 76 – Coming This Summer