This book contains some brilliant writing and colorful characters. It’s a freewheeling 1970s update on the classic noir detective novel.

The book begins just as private eye C.W. Sughrue is catching up to famed author Abraham Trahearne. Trahearne has been touring the seedy dive bars of the western states on an epic bender since his second wife disappeared. Sughrue was hired by the author’s first wife to bring him back home. The detective and fugitive are well matched for adventure. Both are war veterans and literate, intelligent, reckless alcoholics. 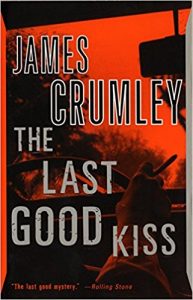 When Sughrue finally catches up to Trahearne, the two become fast friends, and the best parts of the book are the descriptions of their carousing. The first interaction between the two characters gives the general flavor of the first two-thirds of the book. Sughrue is examining the gunshot wound in Trahearne’s ass after a barroom brawl, while Trahearne drinks whiskey to ease the pain.

“What’s it look like?” he [Trahearne] asked between sips.

“In a few days you won’t have nothing but a bad memory and a sore ass,” I said.

“Thank you,” he said. “But I seem to have both those already.”

A number of other reviewers have remarked that this book reads like a cross between Raymond Chandler and Hunter S. Thompson. That’s a pretty good description. Sughrue’s actions, his narrative and his worldview are similar to those of Philip Marlowe, though often with a hilarious comic twist.

For example, when he finds himself in the fancy office of a pompous attorney who looks down on him, Sughrue decides his best move is to undermine the lawyer’s arrogance by acting even more presumptuous and entitled himself.

I stood up and walked around behind his desk, took a cigar out of a burled walnut box, lit it, sat down in his leather swivel chair, and propped my boots on his desk.

“What the hell are you doing?” he asked.

“Making myself comfortable, partner,” I said, then blew smoke in his face.

“Get up from there,” he sputtered. He couldn’t have been any angrier if I had sat down on his wife’s face.

That last line is a perfect example of Sughrue’s comic twist on the traditional tough-guy noir detective, and that thread of irreverent, subversive humor runs throughout the first two-thirds of the book, in both Sughrue and Trahearne.

But this is a detective story, after all, so there has to be a mystery to solve, and that’s the focus of the final third of the book, which is darker and more violent. This is where we see Sughrue’s combat training and Trahearne’s more pathetic, childish side. Both of these guys are alcoholics for a reason, and I give the author credit for showing the darker side of chronic heavy drinking.

The writing in this book is far superior to almost everything else in the genre. I give it four stars instead of five only because the mystery was somewhat convoluted and hastily resolved. And it left a bitter taste. But I can see why this book inspired a generation of crime writers. Most novels that intentionally aim at being literary don’t reach as high or as deep as this one, and they certainly aren’t as entertaining.

Pimp by Iceberg Slim
Irrational Man by William Barrett
The Death of the Heart
The Case of the Velvet Claws
Target: The Girl
An Update on the Classic Crime Novel
The Long Dry by Cynan Jones
Johnny Manic Is on Sale