I don’t often write about my day job here, but I have to say, it’s always nice to see a project you worked on having an impact in the real world. Several years ago, an entrepreneur named Phil Reitenour had a scary run-in with an enraged driver . That gave him an idea. What if someone built a mobile app that could stream live audio and video of an unfolding emergency directly to a security monitoring station? Better yet, what if it could stream that data to the nearest police or public safety office? What if it could even show security personnel your movements along a map as the incident unfolded?

Phil founded a company called EmergenSee and built a prototype of an app that does just that. The prototype worked, but that initial version wouldn’t handle a high number of concurrent users, which would be a problem in an event like a bombing or a riot. So EmergenSee hired the company I used to work for, and we rewrote the app so it could scale up to heavy user loads.

Now it’s used by organizations all over the US. Universities, for example, can define an area they want to monitor, simply by bringing up a map in the app and drawing an outline around the campus. When someone on campus opens the app and starts recording, the video, audio, and location data appears immediately on the computer monitors of campus security. This can be really useful for a woman walking alone late at night. The campus police instantly see and hear what’s going on, and they know exactly where she is. This is what they see: 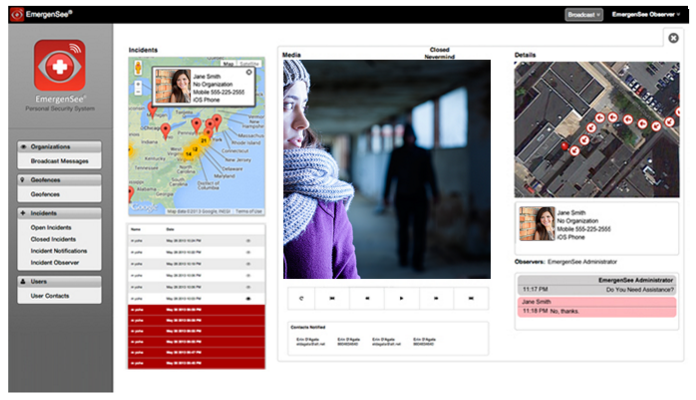 The app has some other cool features. Organizations can push out alerts to subscribers to warn of dangerous situations. Users can set a timer that will automatically alert security, and tell them where they are, if they don’t arrive home within an expected time frame.

This is one of the cooler and more useful projects I’ve worked on in my 18 years as a software developer, and it looks like they’re finally starting to get some attention. Verizon recently awarded them $500,000 to help develop and market the product in their 2015 Powerful Answers Award contest.

If you’re interested, you can get a free version in the App Store or on Google Play . The free version lets you specify personal emergency contacts, and when you begin an “incident,” your contacts will get an alert and be able to watch the incident in real time, with a view that looks just like the one above.