Fabian Nicieza’s Suburban Dicks opens with the murder of a gas station attendant in West Windsor, New Jersey. As a pair of inept young cops are trying to secure the crime scene, a minivan pulls into the station. The pregnant driver’s toddler has to pee, and she does… all over the evidence. 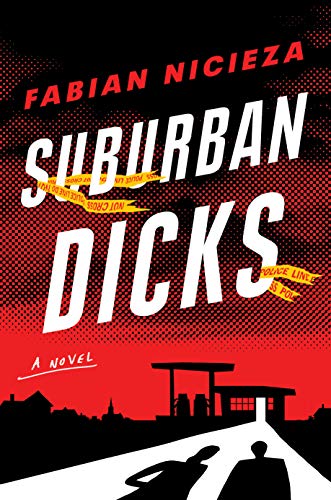 The driver of the minivan, Andrea Stern, a once-promising criminal profiler whose career was cut short by motherhood, picks up more details in her brief survey of the scene than the cops can gather in weeks.

The cash drawer wasn’t open. The placement of the bullet in the center of the victim’s forehead shows the murderer was an expert shot. He knew the victim, who stood talking with his assailant beside the car window. The spray of bullets that hit the building was a deliberate attempt to misguide investigators, to make the shooting look like the work of a nervous amateur thief. This wasn’t a robbery. It was something else.

But why? Find the motive, Andrea thinks, and she can find the killer.

As she broods over the incongruity of the clues, another local investigates the killing from a different angle. Kenny Lee is a once-promising, now disgraced journalist whose career has sunk from a Pulitzer Prize at a big city daily to covering tree plantings at the retirement home for a small-town weekly.

Kenny has little interest in the victim, the family, or anyone besides himself. He’s an avowed “selfish asshole” whose only interests are getting attention and getting his career back on track. In his pursuit of a story, he’s brash, rude, and intrusive. He’ll corner a grieving relative in the most uncomfortable moment just to get a visceral reaction. He’s the embodiment of the most sociopathic character traits of callous, career-driven, story-at-all-costs journalism. He’s also very funny.

It soon becomes clear that the cops don’t want to solve this crime. In fact, it appears they’re covering up. It may just be that the solution to this crime points toward an even worse offense, toward an older and larger crime that the local cops and the town government want to keep hidden.

Realizing they’re up against the entire local establishment, Kenny and Andrea team up for a two-pronged approach to the investigation. While Andrea quietly follows her intuition to gather facts that will stand up in court, Kenny badgers the cops and local officials relentlessly and obnoxiously, keeping them uncomfortable at all times, forcing them to make mistakes.

The title, Suburban Dicks, refers both to Andrea and Kenny’s roles a detectives and to the character of many of the small town politicos they’re investigating. There are quite a few dicks in the West Windsor government, and Kenny Lee is a match for all of them.

This book reads like a Carl Hiaasen novel, with its deep dive into local civic corruption. But the satire, while strong, is less over-the-top. It also has elements of Law and Order, with a detailed and accurate account of the investigation’s mechanics, the forensics and the process of evidence gathering.

Issues of race and social change pervade the story. As the neighboring towns of West Windsor and Plainsboro evolved over the past fifty years from farmland to suburbs, the racial makeup of the towns changed. With that change came social tension, and the original crime, the one Andrea intuitively senses officials are trying to cover up, was a result of decades-old racial tension and change.

Nicienza does a superb job of weaving character, society, mystery and satire into an entertaining and satisfying novel. You can sink into this one and never be bored. Issues of racial, ethnic, and gender identity are both in the forefront and in the background throughout the story.

While acknowledging how these issues warp and damage American society, the author’s satire doesn’t spare the excesses of woke culture. His dark humor transcends our polarizing politics and strikes at the root of human nature.

“We all judge the choices other cultures make,” Andrea observes. “Ultimately, we usually like what we’re raised to like and that’s the way it is.”