Then She Was Gone by Lisa Jewell

I’m often disappointed by contemporary mystery and thriller bestsellers. The characters are flat and unengaging, the writing is often heavy-handed, as if the author is telling us through a bullhorn what we’re supposed to feel. Many writers jack up the action to make up for a lack of depth, like a bad guitarist turning up his amp to try to bowl us over with power because he doesn’t have the skill to win us over with substance.

I read a lot of older mysteries, not because earlier eras magically produced better books, but because after the publishing hype machine dies down and a book is left to survive solely on its merits, the bad ones sink and the good ones remain. If a book has been in print for fifty or sixty or a hundred years, it’s because several generations of readers have found reasons to like it. 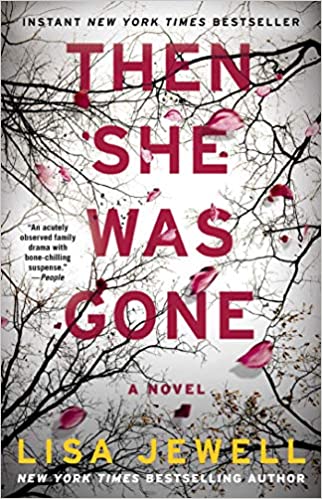 After so many disappointments with contemporary “unputdownable must reads” and “stunning masterpieces,” it’s refreshing to find a book like Lisa Jewell’s Then She Was Gone. A male author would have a very different take on the story of a girl who disappears. What would she need? Why, a hero, of course. It would be a story of good guys versus bad guys, with the girl being what Alfred Hitchcock called “The MacGuffin,” the thing that everyone is after. Whether it’s the Maltese Falcon or the Flux Capacitor, the intrinsic value of the MacGuffin is irrelevant. Its purpose is to advance the plot.

In Jewell’s case, the girl in question, Ellie Mack, is embedded in a tightly-woven social world, at the center of which is her mother, Laurel. Ellie’s disappearance tears an irreparable hole in the fabric of that world, leaving a wound that affects every aspect of her family’s life.

Jewell doesn’t dwell on the trauma, but she weaves its effects through the story. It colors Laurel’s perspective on everything and affects her in ways she’s not even aware of. Because we see people and events from Laurel’s perpective, we don’t understand that some of what we’re seeing is distorted until Laurel herself becomes aware of the distortion.

Jewell is particularly good at describing the shifting dynamics of interpersonal relationships, and the subtle underlying feelings of guilt, desire, envy, love, joy, and anxiety that shape those dynamics like currents in a living sea. Her characters are perceptive and aware, with an evolving self-awareness that makes them richer and deeper than most. Their lives, like ours, are made up of mundane details, imperfect relationships, small annoyances, predictable frustrations, and unexpected triumphs. And somehow they all amount to more than the sum of their parts.

The bulk of the story takes place ten years after Ellie’s disappearance. Laurel is still unsure of her daughter’s fate, still looking for closure. Early on, the reader gets a general idea of what happened to Ellie. The picture sharpens as the story unfolds, with the reader getting a few more details than Laurel, who is slowly beginning to put the pieces together.

If this were a straight mystery/thriller, it might be classified as a procedural, since the reader knows what happened well before the end, and much of the story’s second half focuses on the detective (in this case, Laurel) formally connecting the dots. In a traditional procedural, the payoff is justice. The bad guy is caught and put away.

Jewell’s novel is more complex, more personal, and more ambitious. The unwinding of the case parallels the unwinding of Laurel’s deeply wounded psyche. The payoff doesn’t take place in the criminal justice system, but in the mind of the aggrieved. The process of emerging from grief is deeper and more complex than a police booking and a jury trial.

The author obviously spent a lot of time with her main character. She knows Laurel well. Jewell’s skill as an author lies in her ability to portray a rich and nuanced character in all of the varied contexts of modern life: family, work, public, friends, dating, solitude. She also tells a really good story. If you haven’t read this one yet, put it on your list.

Vanish in an Instant by Margaret Millar
Impala Wins Gold in Reader's Favorite Book Awards
The Girl in Cell 49B by Dorian Box
Misreading
The Woman in White by Wilkie Collins
The Cocktail Waitress by James M. Cain
Awareness by Anothony De Mello
Indie Reader Interview