The Door by Magda Szabo

Usually, when I finish reading a book, I write a thousand-word review. I can’t do that with a book as deep, thoughtful, and moving as this one. There’s just too much there. This will be one of those rare books I’m still digesting months or even years after finishing. This is also one of the few that will go onto my re-read list. 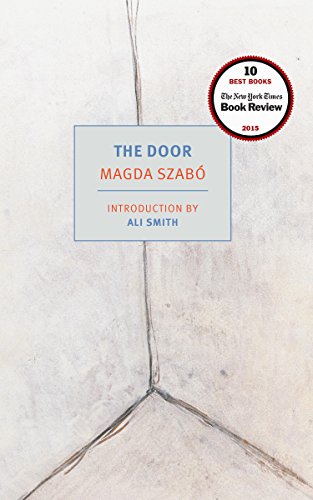 For the first 90 pages or so, I felt the book was going nowhere, and I would have given up if not for the many glowing reviews. The Door is a social study, a psychological study, a study in religion, a character study and a profound and visceral meditation on the meaning of existence. In a book like this, the character under the microscope has to be interesting. For the first 90 pages or so, Emerence just wasn’t interesting enough.

That started to change around page 90, and I began to have the feeling I’d had many years ago when I re-read Flannery O’Connor after a decade away. O’Connor’s prose was so striking, I just kept thinking, “Oh my God, I’ve been reading crap. Everything I’ve read in the past few years has been crap.”

With Szabo’s book, it’s not the prose but the depth. I started to feel embarrassed about what I’ve been reading these past few years. You’d think a writer who pens an entire book about a difficult, stubborn, opinionated cleaning lady isn’t aiming very high, but I’ve read few books that reach as high or as deep as this one. Emerence is one of the most fascinating characters in modern fiction, an illiterate philosopher whose deep understanding of humanity is grounded in irrefutable experience.

The love and conflict between her and her employer, the “writer lady” Magdushka, are powerful illustrations of how religion, the intellect, and the social order struggle to contain and make sense of what William Butler Yeats called “the uncontrollable mystery on the bestial floor.”

I’ve read a lot, and although there are many modern classics I’ve yet to pick up, I rate this novel alongside Coetzee’s Waiting for the Barbarians and John Williams' Stoner as among the best of the second half of the 20th century.

Like life itself, you can’t categorize it or explain it. You just have to experience it.

Kill Romeo
American Kingpin by Nick Bilton
The Great Divorce – C.S. Lewis
The Bhagavad Gita: The Song of the God Retold in Simplified English
The Wisdom of Insecurity by Alan Watts
An Update on the Classic Crime Novel
Discover Great Reads on Shepherd.com
You Play the Black and the Red Comes Up by Richard Hallas