The Listening Walls by Margaret Millar

Margaret Millar’s The Listening Walls opens in a room in the Windsor Hotel in Mexico City in the late 1950’s. Two American women are vacationing together. The mousy, deferential Amy Kellogg is feeling some resentment after getting roped into this trip by her domineering friend Wilma Wyatt. 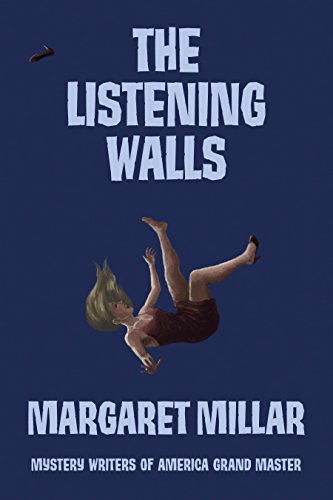 Wilma, thirty-three and just coming off her second divorce, is alternately high-spirited and moody, arrogant and temperamental, a drama queen seeking attention and excitement to distract from a life that wasn’t going as planned. Her presence fills the room and leaves no air for the quiet Amy, who is slowly awakening to see how her own compliant nature has led to a lifetime of her doing only what others want her to do.

In a fit of discontent, Wilma goes to the hotel bar to get drunk. She picks up a young, handsome American ex-pat before Amy comes down to chaperone her. The man keeps ordering rounds for the three of them. The women get drunk, their frustrations with each other boil over into argument, and the man leaves.

The women return to their room. Wilma Wyatt goes over the balcony and plunges to her death on the sidewalk below. A hotel maid arrives seconds later to find Amy Kellogg unconscious on the floor with a head wound. No one else is in the room.

According to the police, Wilma killed herself. She was very drunk, emotionally reeling from the divorce, and she had attempted suicide before, at a party, of all places, in the presence of her friends.

Amy can’t remember anything after leaving the bar. She’s not a drinker and has never been drunk before. She also has a concussion.

Her husband, Rupert, travels from San Francisco to collect her from the hospital, but he never brings her home.

When Amy’s paranoid and controlling brother demands to know where his sister is, Rupert Kellogg shows him a letter, written in Amy’s hand, that says she has decided to go away indefinitely. She’s tired of being pushed around by everyone–by Wilma, by her husband, and most of all by her obsessive, relentless brother–and she’s going to live alone for a while, with no one to lean on, so she can develop the confidence and backbone she needs to be a strong, self-sufficient person.

The brother believes none of this. He hires a detective to find his sister, and the detective, of course, begins to see the uglier sides of all the players involved.

One of the strengths of Millar’s work is the vividness of her characters. She can bring them to life with just a sentence or two of description and a few lines of dialog. Without delving into convoluted backstory, you know exactly who you’re dealing with.

Millar’s prose and dialog are always top notch, and she has an exceptional ability to convey the complex and often uncomfortable dynamics between men and women, and between women and women.

The Listening Walls shines mostly for its suspense. You really have no idea whether Amy is alive or dead. You never quite know who is on the right side of things and who is not. Every time you think you know, you learn something new that throws your whole assessment into doubt.

The meat of the story unfolds in the course of the detective’s investigation. Why is Amy’s brother’s wife so fond of Amy’s husband? Why was Wilma so fond of him? Why is his own secretary in love with him? Why does the hotel maid flit in and out of the story? Why does the American ex-pat reappear? Millar writes a juicy mystery with real, engaging characters who you feel you really know, though you can never quite figure out whether you can trust them.

The only weakness in the book is in the near-final scene, the climax in which the most unlikely players enact a most unlikely scene. In a story that is otherwise remarkable for its realism, that key scene requires quite a suspension of disbelief.

That scene seems to resolve everything very neatly, until at last we get one final twist that leaves us, at the end, just as off-balance as we’ve been throughout the book. From beginning to end, Millar delivers everything that mystery readers look for in a mystery, and then leaves you with one more for the road.

Millar is the antidote to so many of today’s flat and formulaic bestsellers that merely go through the motions, serving up cardboard bad guys and illogical plot twists in lazy-minded, second-rate prose. Millar’s plots are well constructed; her prose is sharp, observant, and witty; her characters are true to life, at once complex and vivid. It’s a shame she’s not more widely read.