The Case of the Velvet Claws

Perry Mason makes his first appearance in The Case of the Velvet Claws. The book begins with a Mrs. Eva Griffin approaching Mason for a favor. She’d been out on a date the night before with a man who wasn’t her husband. The police showed up to investigate a robbery at the hotel where said date occurred, and they took statements from witnesses. 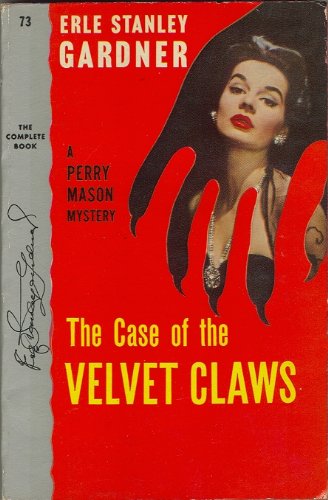 Eva Griffin’s date was a powerful local politician, powerful enough to get the police to exclude his name from the witness list. A local gossip paper, however, knows he was there and they’re going to publish the story, which will ultimately expose Eva’s infidelity to her husband.

Eva Griffin wants Perry Mason to stop the story from being published. Mason is familiar with the paper and its mode of operation. It’s a thinly veiled extortion racket that makes its profit by digging up dirt on the rich and powerful and then collecting huge fees to suppress damaging stories.

So the setup here is simple enough. Rich woman hires lawyer to sound out the extortionists, see how much they want, and then broker a deal.

Only Perry Mason does not like extortionists, and isn’t willing to pay them off even when his client is. In addition, both Mason and his secretary, Della Street, sense there’s something deeper to this woman’s request. She seems more scared than she should be. And Mason soon discovers that Griffin isn’t her real name.

Though nominally an attorney, Mason’s role in this novel is more of an investigator, and he’s a hard-boiled one at that. This Perry Mason is nothing like the well-mannered TV character making shrewd courtroom arguments in his respectable tailored suit.

He’s a lot closer to Dashiell Hammet’s Sam Spade, always in the thick of the action, lying when necessary to trick criminals into betraying each other, and using his fists when all else fails.

Like Hammett’s detective, Mason seems to know all the right people, including which cops and other detectives can lend a hand in his investigation, who owns the pawn shop, who to talk to at the local paper, and more.

Like Hammett’s novels, The Case of the Velvet Claws moves rapidly. All the action unfolds in forty-eight hours or so, and the plot twists everywhere. One of the biggest twists comes early on, when Mason accidentally discovers who his client really is, and what she’s so scared of.

That twist, which might have been the highlight of a contemporary mystery, is only the beginning. The further Mason digs into the case, the deeper he finds himself in a nest of trouble with some very hard-nosed, ruthless characters.

And while Mason is a match for all of them, his biggest risk may come from his client. She lies constantly, and her sole concern is her own survival. The case evolves from simple blackmail to murder, and Mason finds himself maneuvered into a position where he’s a plausible suspect. Worse still, his unreliable client may become the witness who fingers him as the killer.

There’s no lack of action or intrigue in this one. On one side, he’s trying to out-blackmail the blackmailers, while on the other, he’s trying to keep the police from arresting him. And all the while, he’s trying to be loyal to a double-crossing client who may not deserve his loyalty.

It’s an ambitious plot that only an excellent writer can pull off. Gardner does it, and he does it very much in the fashion of Hammett, who always seems to keep the reader a step behind the detective, panting and eager to catch up.

According to the postscript, this book sold forty-eight million copies during its first fifteen years in print. I can see why. Hammett’s new style of writing caused a sensation just a few years earlier. His books were bestsellers, but the violence in some of them, particularly Red Harvest, was over the top.

In this book, Gardner produced a compelling Hammett novel without the gore. I haven’t read the other eighty or so books in the series (yes, eighty!), but I wonder how Mason morphed from the ruthless hard-boiled character of 1933 to the tame, advertiser-approved TV character of the nineteen fifties and sixties.

Like Margaret Millar, Gardner was a star in his day, and regularly topped the bestseller lists. It’s a shame this book isn’t currently in print in paperback. I think it would have a wider readership among classic crime fans if more people knew about it.

If you like old-school crime novels, unflagging action, and a story that will keep you guessing, this one’s for you.