Stephen Galloway’s Truly, Madly describes the long and tragic arc of one of the twentieth century’s most extraordinary love affairs. Laurence Olivier and Vivien Leigh fell in love while each was already married to someone else. Each had a child, and neither was suited to parenthood or fidelity. 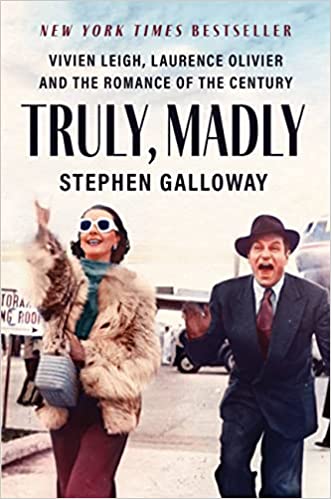 Olivier’s first wife, Jill Esmond, seemed to recognize early on the intensity of the Olivier-Leigh bond, and what it meant for her marriage. She told their son, Tarquin, “I have seen true passion only once. God help you if it gets a hold of you. There’s nothing to be done.”

Olivier possessed unusual talent, dedication and ambition. Leigh had beauty, vitality, drive, and an almost uncanny sense of destiny. In London in the 1930’s, when she was just beginning to make a name for herself on the stage and was still unheard of in America, she told everyone who would listen that she would play Scalet O’Hara in Gone with the Wind.

In 1938, she traveled to Los Angeles to join Olivier, who was working on another film. She happened to arrive the day filming for Gone with the Wind began. At the time, George Cukor (later to be replaced by Victor Fleming) was directing a number of early, outdoor scenes that did not involve any of the main players, and the role of Scarlett had not even been cast.

Bette Davis and Katherine Hepburn were in the running until producer David O. Selznick’s brother, Myron, met Leigh in a Hollywood hotel. He took her onto the set’s observation deck and introduced her to the producer and director as Scarlett. She did her screen tests and won the part, making good on her impossible boast.

Galloway’s tale is well researched, with many private scenes in the actors' long love affair fleshed out not by speculation but by the words of friends who were there. Galloway dug through decades of letters, archives, memoirs and interviews to give us first-hand accounts. Though his writing occasionally has the breathless tone of an excited gossip reporter, he does an excellent job of putting the scenes together and of explaining their significance.

The story of either one of these actors is enough to fill a biography. Much of Galloway’s tale describes the making of the couple’s many films and plays. If you’re unfamiliar with the process of how movies and plays come to life, this aspect of the book alone will be eye-opening.

Often, there’s as much drama involved in creating a film or play as there is in the piece itself. Nothing is easy in the actors' world. Nothing is glamorous. It’s a demanding life that requires immense commitment and a level of emotional strength and endurance that few possess.

Both Leigh and Olivier drew on the turbulence of their private lives to deliver moving and memorable performances. And their lives together were always turbulent.

Leigh’s bipolar disorder, which revealed itself slowly over a number of years before becoming a full-blown, debilitating disease, is heart-breaking. So are Olivier’s attempts to deal with it. If you’ve ever been close to someone who is mentally ill, you’ll feel the desperation of Leigh’s struggles, and you’ll feel it hard.

The writer deserves praise for his sympathetic portrayal of an extraordinary mind and an extraordinary love descending into an agonizing death spiral. The reader feels the pressures bearing in on all sides of this couple, as well as the destructive pressures emanating from within.

Galloway consults experts to help explain both the manifestation and the experience of Leigh’s illness, as well as attitudes and treatments available at the time. He also gives a rich portrayal of the couple’s famous social circle, which was often accepting and supportive despite their many internal rivalries and betrayals.

The luminaries of the London stage watched with horror and sorrow as the pressures of fame crushed the love between two gifted individuals. “They are eminent, successful, envied and adored, and most wretchedly unhappy,” observed their friend and frequent visitor, Noel Coward.

Anthony Quayle, who saw them perhaps a little more closely than he would have liked, said, “They have made a pact with the devil. He said, ‘You can have everything, all the riches, and you will be King and Queen of the theater but there’s only one condition: You must stay together for the rest of your lives.'”

Well, they couldn’t, and they didn’t. The passion that inflamed their genius engulfed everything in its path, and these two paid a heavy price for the artistic gifts they bequeathed us. In Galloway’s hands, their story is tragic, moving, enlightening, and well told.

Paris, Sept. 2017
Night Has a Thousand Eyes by Cornell Woolrich
The Late Monsieur Gallet
The Girl in Cell 49B by Dorian Box
The Plains of Cement by Patrick Hamilton
A Practical Guide to Self-Publishing
I Was A Spy by Marthe McKenna
The Billion Dollar Whale