I Heard You Paint Houses

Charles Brandt, an attorney from Delaware, spent years interviewing Mafia hit man Frank Sheeran. Sheeran was one of the prime suspects in the disappearance of Teamsters president Jimmy Hoffa, but because of all of the suspects refusal to talk, neither the local police nor the FBI could ever gather enough evidence for a conviction. 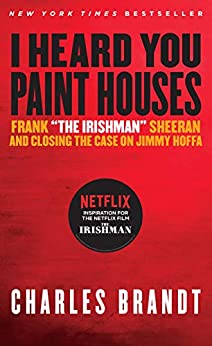 After decades of investigation, the FBI closed the case and left it unsolved. Brandt, who had extensive experience in criminal law and who helped win Sheeran’s release from prison on medical grounds, thought he could draw a confession from the elderly Sheeran who had begun to reconsider his life as he approached death.

Sheeran had grown up poor in Philadelphia during the Depression. His father used to throw him into fights against bigger, older kids, betting on him to win. The family needed the money, and Sheeran didn’t want to disappoint his father, who would give him a beating if he failed.

In World War II, Sheeran had an unusually long tour of duty, surviving 411 days in combat under some of the war’s worst conditions. His commanders often called on him to execute captured soldiers, a task he dispatched with cool efficiency.

His home life and his military service conditioned him to be an effective killer. By the time he left the army, he was six-foot-four, powerfully built, and highly skilled with firearms. He returned to Philadelphia with no job prospects, but he was outgoing and easily made friends with the Italians in South Philly who could supply him with odd jobs. All in all, this was the perfect recipe of the right man being in the right place at the right time: the perfect conditions for a life to go wrong.

Sheeran’s life really took a turn after a chance meeting in a small town in New York State. An older man helped him fix his truck when it broke down, and the two struck up a friendship. Sheeran didn’t even know at the time that there was such a thing as the Mafia, or that he was already a part of it. Nor did he know that the man he’d befriended by chance was the not only the head of the regional organization, but also the boss that all the other bosses turned to when they had sticky problems to work out.

The boss put Sheeran in touch with Jimmy Hoffa, who was looking for help organizing workers in Detroit and Philadelphia. Over the course of more than fifteen years, Hoffa and Sheeran became close friends. And then one day Jimmy Hoffa became one of those sticky problems that had to be dealt with…

This book is fascinating from beginning to end because Sheeran himself is a fascinating character, and because he provides a clear, detailed description of a violent culture in which he is at once and insider and an outsider, a feared master of the game who might at any moment become a victim himself.

The book also sheds some light on the rampant and astonishingly flagrant corruption of local and national politics. Sheeran and his Mafia friends had some more than shady dealings with the Kennedy administration, with Richard Nixon and his Attorney General John Mitchell, and with the early career of the up-and-coming Joe Biden.

Whether you’re interested in crime, politics, or the social history of mid-twentieth-century America, I can’t recommend this book highly enough. Brandt did a brilliant job with a once-in-a-lifetime subject.