The Body Keeps the Score

The Body Keeps the Score describes what Dr. Bessel Van Der Kolk has seen and learned in his thirty-plus years of treating trauma survivors. The author describes the causes and manifestations of trauma in a number of patients from his clinical practice: abused children, combat veterans, victims of accidents, rape, and assault. He describes how the intense emotional impact of trauma can linger for years when the mind is unable to assimilate the unbearable terror of events. 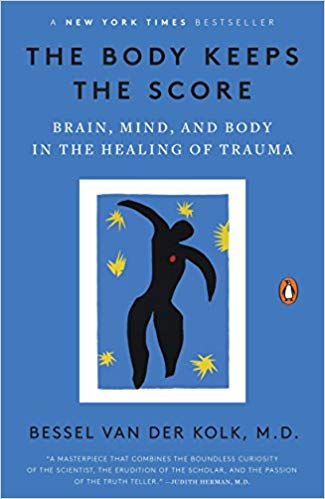 The symptoms of trauma often appear in the body, in persistent tension, in postures and facial expressions that show detachment or hyper-arousal. Trauma victims, he notes, are often deeply out of touch with their bodies, unaware of and unable to describe basic physical sensations. They also live outside the flow of ordinary daily life, unable to fully engage with the people around them.

After describing causes and symptoms, the author spends the final eight chapters discussing various treatments that have proven effective in his and others' clinical practices. So long as trauma’s effects lie outside the realm of awareness and beneath the reach of the rational mind, they will dominate victims' lives. The most effective treatments work to reconnect trauma victims to their own bodies and feelings, and to integrate the timeless, fragmented, and often unbearably terrifying traumatic experiences into the survivor’s sense of self.

This book is most valuable for its clear elucidation of what goes on in the minds and bodies of trauma survivors, of how different parts of the brain and body are specifically affected, and how their communication breaks down. Van Der Kolk spent decades understanding what was broken and how it was broken, so that he would know what to fix and how to fix it.

This is a valuable book for people trying to understand the experience of those who’ve been traumatized by abuse, violence, or neglect. It offers a great deal of wisdom, hope and practical methods for healing.