The Girl with a Clock For a Heart

The title alone made me want to read this one. It’s supposed to be a noir thriller, though it lacks the brooding spell and the sense of inevitable, darkening fate that distinguish the classic noirs. The book has a number of glaring flaws, but the story has enough twists to keep you reading. 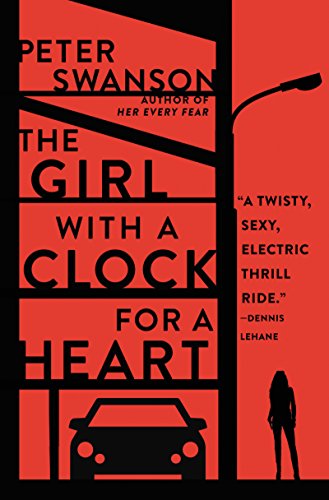 There’s only one, and that’s the plot. It’s full of unexpected twists and it keeps thickening. The story moves back and forth between the present day, when Liana Decter re-enters George Foss' life, and twenty years earlier, when they met as freshmen in college.

I don’t want to give away the twists, but suffice it to say George and Liana’s youthful affair broke off unexpectedly, and George’s heart has never quite let go of its great love.

In the years since college, George has drifted along the safe and easy course of a not-quite-fulfilling life, toiling away at a job he no longer cares about and sort of dating a woman he can’t commit to.

When Liana walks back into his life after a two-decade absence, he lights up. Turns out, she’s in trouble and could use a favor. How can he say no? Even if the favor is a big ask. Even if it doesn’t seem quite right.

There’s lots to list here, starting with the writing. Granted, this was Swanson’s first novel, and I hate to pick on a writer for making mistakes I’ve made myself, but I do think Swanson’s editors should have helped him out more.

The writing is often clunky, with sequences of short, declarative sentences that read like a child’s primer: “George went to the pub. George got a beer from the bar. George sat in his favorite booth. George took a sip of his beer.” That sort of thing.

There are lots of information dumps. As George drives somewhere in his car, the narrator fills you in, lecture style, on the events of last night. Many of these information dumps occur in dialog, with a secondary character spilling a long story, unprompted, in the same voice as the narrator. These frequent dumps fill the reader in and advances the plot, but they feel contrived and awkward. They pull you out of the story, breaking the sense of immersion.

The book’s biggest flaws are lack of characterization, atmosphere, and flavor. None of the characters are particularly deep or compelling. The ungainly prose focuses more on explaining details than on conveying a clear voice or perspective. The chronological back-and-forth within many of the present-day chapters makes the reader work hard to untangle a narrative that the author should have straightened out himself.

And yet, despite all this, the book is almost impossible to put down. Soon after George does his favor for Liana, he finds himself in a world of trouble. I won’t give away the details of the intricate plot, because the joy of the book lies in the long stream of unexpected twists.

If you’re looking for a good entertainment, something for the plane or the beach, this one fits the bill. In the hands of the right team, it would make an excellent movie.